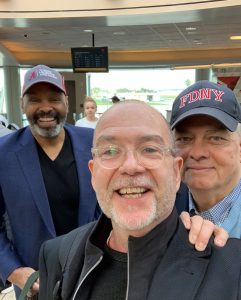 20 years ago, Dave Swanson (NCS Fairfield) candidly admits that he was living a double life – seemingly good guy by day and “whatever” at night.  Being on the road regularly for business only fueled his inner conflicts. He attended church, but his life made a positive shift when he was befriended by a group of solid guys who recognized his personal challenges, and weren’t critical of him, but rather were willing to be there for him and love him in spite of his shortcomings. These men showed Dave in a powerful and profound way what love looks like lived out. With unquestionable confidence Dave often tells others, “God showed up in my life through these men and their love and compassion for me and their trust in Jesus  completely transformed my life.”

From that point on, Dave’s heart was filled with gratitude for what God had done for him. He wanted to right wrongs that were a result of his past.  He made a renewed commitment to his wife and sons. This began a healing process that he recognizes saved his marriage – allowing him to turn things around and set a better example for his two young sons (now 31 and 27). This sparked something within him that he hadn’t experienced previously.  He says without doubting, “God was calling me to show up for others.” He remembers his Dad’s life motto, “Good things happen when you show up early.” Showing up for others has been a huge dynamic for him.  He says proudly, “My Dad taught me that showing up is half the battle. God is much more interested in the state of our hearts and our commitment to each other than the state of our circumstances.”

Dave learned of NCS through his father, who had repeatedly encouraged him to attend a meeting given his own longstanding relationships with several members–something Dave had zero interest inndoing. Shortly after his father’s death in 2001, he attended his first meeting at Jim Lane’s house, out of respect to his father. Dave says joyfully,  “I tell ya, the love that was shown to me by all the guys in my time of grief and loss was so profound and overwhelming. I never missed another meeting!  Soon after, my friend and U.S. Congressman, Chris Shays, introduced me to Wiley Muillns who also attended NCS. Chris strongly felt that the two of us were destined to be friends.  He was right!  Almost 20 years later, Wiley remains my closest friend.  Several years later, Jim Lane asked me and Wiley to start a second chapter in Connecticut.  We launched NCS Fairfield (aka The Journey).  For years now we’ve worked closely building  the chapter, and what a journey it’s truly been. Only in God’s Kingdom does stuff like that happen!”

Without hesitation, Dave says, “When we commit to showing up for each other, giving freely of ourselves and sharing experiences, the Holy Spirit uses our collective struggles to encourage one another – GAME ON! God wants us to live the life of freedom he intended for us, and he sets the table for us to show up for each other.  Doing life in a community of brothers is a gift from God. We weren’t meant to do it alone. So, when we’re willing to say “yes” to God, we’re stepping up and leaning into being a part of something that’s bigger than ourselves, and being an instrument in God’s plan to answer the hopes, needs, and prayers of others. Why would we ever want to miss out on that?”