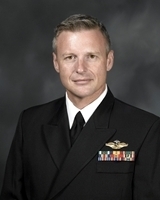 Before becoming the Senior Protestant Chaplain at the U.S. Naval Academy, LCDR Brian Weigelt witnessed heroism when he was stationed in Iraq with a Marine battalion during a time of fierce combat. During their six-month assignment, 33 men in the battalion were killed and 250 received Purple Hearts. Weigelt shares what a Midwestern farm boy learned about courage, both personally and by observing and getting to know Marines in action. He learned that Marines are conditioned to love the Marine Corps, to love their fellow Marines and to love the people they are defending. It is this love that leads to the extraordinary courage for which the Marines are known. Weigelt explains how he learned that courage has a relational dimension and that love is, in fact, the only emotion capable of overcoming fear and permitting the exhibition of courage. Weigelt shows it is true in the Marines and in the Bible, and he explains why it is so important in the lives of NCS brudders.