Our Chapter Friday meeting today again contained quite a few nuggets to remember (or catch-up on if you missed it)–it was a day about being a Dad (or Grandfather).

Our guest speaker, Mark Merrill (Mark’s talk is already available under Resources–click HERE), who has devoted the last 25 years to helping families love each other better, shared valuable wisdom and practical tips for fathers and grandfathers on loving and raising children. Mark explains his three “M’s” of parenting–Make-up, Method and Model, including six simple sentences every child needs to hear.  This is really basic and easy stuff every Dad should be doing, but probably isn’t (or at least not enough).  [We apologize that the first few minutes of Mark’s talk were lost due to a technical glitch–it was just where he shared his faults, failings and dark secrets]

I saw many of you writing feverishly, so here are some of the nuggets from Mark’s talk:

If you want to check out Mark’s All-Pro Dad, click HERE.

Our brudder Don Rhoads shared an incredible miracle story involving the inexplicable (at least to the doctors) healing through prayer of his 13 year old daughter from a rare form of cancer that is “uncurable”.  This story is told in NCS brudder Paul Teske’s book Healing for Today (starting at page 112).

After the meeting, our brudder David Rucquoi shared with me a very funny story that makes him an “All-Pro Dad” by being a hero for his kids (but he could have just as easily ended up as one of the Dad “fails” in the funny video we watched).  Read Dave’s story below

From David Rucquoi:  As a stay-at-home father, raising my own three teens – along with three primary-aged girls of two adults who are currently not able to care for them,  I have had several unique opportunities to delve into the fundamental needs of children, and view the intrinsic value a father can offer, especially for girls. Given my marketing background, the opportunity to reach the target market by successfully appealing to their demonstrated needs and wants is compelling.

Last night I watched as the younger girls were out with an elementary-aged neighbor-girl (single mom home) entertained by her Razor/scooter, and the feature it had of a brake mechanism that produced sparks when engaged.  They thought that was “cool.”  My teenage daughter wanted to add to the entertainment by putting a scrap of paper on the road, engaging the brake on it, and setting it on fire.  Unfortunately, the initial excitement over this proposition waned through repeated efforts with lack-luster results.  Enter Dad 1.0.

I came out nonchalantly with a drink it my hand acting oblivious and inquisitive.  Upon explaining their frustration, I asked, “May I try?” as I put my “drink” down on the road and “accidentally” spilled it.  It was, of course, no ginger-ale; rather, an accelerant of high-octain proportion.  Being the bright young girl that she is, my 15-year-old daughter realized quickly that her dad was up to something; and, also knowing I couldn’t ride that scooter for my life, she offered to demonstrate on my behalf.  Thus, our demonstration was engaged, as the following pictures illustrate: 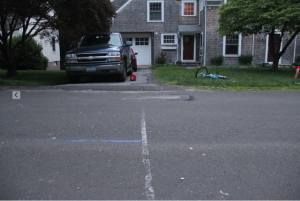 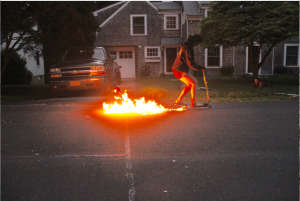 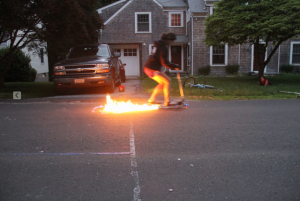 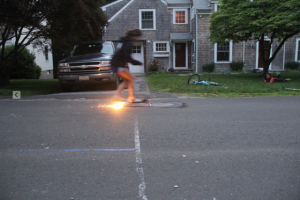 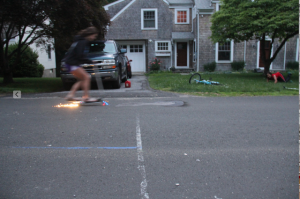 I must acknowledge, after the first demonstration, they obviously wanted to do it again (to verify the scientific viability that this was both repeatable and verifiable); thus, revealing my secret, you can view the gas can in the background in this reconstruction of the initial demonstration.

While other neighborhood parents did not share in the girl’s enthusiasm, as indicated by the police cruiser that was circling our neighborhood shortly thereafter, our focus group indicates a favorable response from the target audience that has sustained high ratings, as I have been dubbed, “The best dad ever.”

While product release of Dad 1.0 is not scheduled for the immediate future, the favorable focus group data has been encouraging.