Dan Haseltine tells us that a songwriter’s job is to describe the world as it is and as it it could be, and he presents his vision of both.

Starting with a painfully vulnerable description of his childhood, Haseltine explains how a dysfunctional and volatile family life pushed him to music, and how music led him to mission. He transparently shares the generational brokenness that resulted in him growing up without access to a father, and then reveals how watching the Live Aid concert in 1985 transformed his understanding of rock and roll and permanently fused in his mind “music” and “mission”.

After describing the unlikely genesis of Jars of Clay at a small college in southern Illinois, Haseltine explains how the band was led to use its platform of musical success to embrace mission by starting the charity Blood:Water.

In telling this story, Haseltine reveals two lessons he has learned about humanity. First, that human beings often try to control or destroy things we do not understand, and second, that we long for “spaceless embrace” with each other but continually drive wedges between ourselves. Haseltine then offers his vision of the world “as it could be”.

Rowland explains how life’s crises, including his two experiences with incarceration and the loss of a child to an opioid overdose, led him to consider the words of Chuck Colson, “God has to break us to re-make us.” Rowland found himself reflecting on what he had done with the hardships and what God’s purpose and plan was for him–asking, “Now what do I do?”. Rowland also shares the moment when, facing the prospect of returning to prison, he felt hopeless and how one simple sentence from his daughters made all the difference.

Finally, Rowland tells about his realization in prison that he had many blessings waiting for him when he returned home–a family, finances, friends, a home–and that many of his fellow inmates had none of these. Rowland shares about his commitment to do something about their situation and how he trusted God to steer him in the right direction after he was released. God steered him to Prison Fellowship.

Paul Plouffe shares, with extraordinary transparency and authenticity, the story of his life in three stages he calls “Building the Box”, “Maintaining the Box” and “Dismantling the Box in Christ”. In “Building the Box”, Paul explains how he created an identity in a family environment that included a father and an uncle who were boxers. He shows how our identity is a reflection of what we see in those closest to us–parents, relatives, friends, community. We select or de-select features that we want to emulate or avoid as we create a “me”. Plouffe then explains how he struggled to “maintain the Box” through life in the face of tension, opposition and new challenges. Finally, he shares how he has been exchanging his identity, piece by piece, at the Cross for a new identity–an eternal identity in which each of us is “just anudder brudder”.

Below is the Plouffe Family Mission mentioned in Paul’s talk as well as a link to a document he shared about Christian meditation. 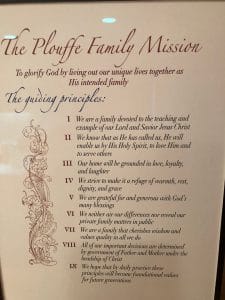 The 2018 New Canaan Society New England Regional Retreat was held November 2-3 at Jiminy Peak Mountain Resort in Hancock, MA.   The theme was “Community Changes Everything”.  This is Doug Goulding’s “Keepin’ It Real” testimony shared on Saturday morning.  Doug was introduced by his brudder Paul Michalski.

The 2018 New Canaan Society New England Regional Retreat was held November 2-3 at Jiminy Peak Mountain Resort in Hancock, MA.   The theme was “Community Changes Everything”.  This is Chip Skowron’s “Keepin’ It Real” testimony shared on Saturday morning.  Chip was introduced by his brudder Rob Brinkman.