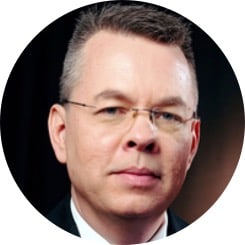 Andrew Brunson is an American pastor and author of God’s Hostage, the incredible true story of his imprisonment for two years in a Turkish prison, his brokenness, his faithfulness . . . and his freedom.

In 1993, Andrew Brunson was asked to move to Turkey, the largest unevangelized country in the world, to serve as a missionary. Though reluctant at first because of the daunting task that lay ahead, Andrew and his wife, Norine, became convinced this was God’s plan for them.

Andrew and his wife, Norine, were involved in starting churches, training believers, aiding refugees, and a house of prayer in Turkey for twenty-three years until being falsely accused of terrorism in October 2016. Following this, Andrew was held for two years in Turkish prisons. Due to a worldwide prayer movement and significant political pressure from the US government, he was finally sentenced to time served and dramatically released in October 2018.

Brunson holds a PhD in New Testament from the University of Aberdeen, Scotland.