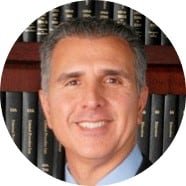 Daniel Buttafuoco is a prominent lawyer, collector of Biblical texts, speaker, philanthropist and NCS brudder.  Born in the 1950’s, he was brought up in a Christian home of Ministers and Missionaries. With a family history rooted deeply in faith and spending most of his life defending people in a courtroom, it seemed only natural for Dan to pursue a Masters Degree in Theology.  Dan was a founding leader of NCS Western Suffolk on Long Island.

Dan was forever transformed with the acquisition of his very first ancient Bible, the 1560 Geneva. Founder of the Historical Bible Society, he is committed to the task of preserving ancient Biblical texts & manuscripts for both study and reference. To aid in this cause, Dan, founded Several organizations and campaigns: Historical Bible Society, YCL Scholarship (a $500,000 commitment to support the next generation of Christian professionals in every sector of society) and The Five Reasons: Bible Tour presenting the five reasons “Why the Bible is the most Important Book You’ll Ever Read.”

His own path eventually led him to become one of the most respected Personal Injury attorneys in the country as the founding and senior partner of Buttafuoco & Associates. To date, his firm has helped injured victims recover over $500 Million (with record settlements in the tristate area), was voted Best Lawyer several years in a row and received the prestigious Super Lawyer certificate (awarded to the countries top 5% attorneys).

He is a regular guest on many New York City radio stations, (WMCA, STAR 99.1, WLIX) as a legal authority, philanthropist and defender of the faith. Dan has toured the country with a traveling museum of preserved ancient Biblical texts & manuscripts with the mission of making the Word of God as accessible as possible to the people of God.

Dan received his B.A. from Hofstra University in 1978; his J.D. from Hofstra Law School in 1981 and his Masters degree in Theology from Alliance Theological Seminary n 2008.

Dan and his wife Cindi, have 3 daughters, one of whom is an Associate Attorney at Buttafuoco & Associates and the mother of triplets. Dan has five grandchildren.