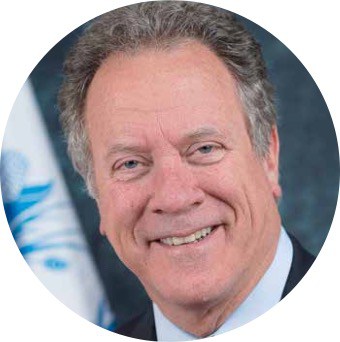 David Beasley, a former Governor of South Carolina, currently serves as the Executive Director of the World Food Programme, having been appointed to that role in 2017 jointly by the UN Secretary-General and the Director-General of the Food and Agriculture Organization of the United Nations.

As Governor of the South Carolina from 1995 to 1999, Mr. Beasley guided the state during years of economic transformation, helping to reshape the state’s economy into a healthy, diverse and robust market. The work led to one of the lowest unemployment rates in the country, with a dramatic increase in private sector capital investment. Mr. Beasley was the first Governor in South Carolina to make a public push for the removal of the Confederate battle flag from the state capitol dome, a move that earned him the John F. Kennedy Profile in Courage Award.

Mr. Beasley received his Bachelor’s degree from Clemson University and a Doctor of Jurisprudence degree from the University of South Carolina and taught at the Harvard University Kennedy School of Government. He was first elected to public office at the age of 21 as a member of the South Carolina House of Representatives. He is married to the former Mary Wood Payne and is the father of four children.