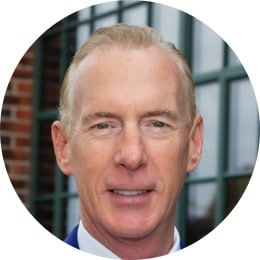 Dean Harrington is the founder and current CEO of Shamrock Home Loans, Southern New England’s largest independently owned home lending company. His role is to exemplify the company’s five core values and to set vision and strategy for the staff.

Dean is the Immediate Past President and current Board Member of The Rhode Island Mortgage Bankers Association and a member of C12 Southern NE Board of Advisors.  In 2014 Dean was recognized by the Banker & Tradesman as one of the dozen most influential mortgage banking executives in New England. Shamrock is a 2014, 2015, 2016, 2017 and 2018 recipient of The Best & Brightest Companies to Work and one of the Top Mortgage Employers by Mortgage Professionals Magazine.  The company employs 70 people and has its corporate offices in the Providence area. Dean likes to remind people that Shamrock is God’s company and that he was just the first guy to turn the lights on in 1989.

Dean is married and has four children.