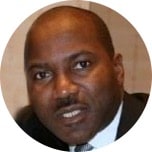 Doug Goulding is a certified life coach, tennis professional, forgiveness, anxiety and depression recovery facilitator, ordained minister and health educator, but his primary identity is as a child of God, brother, friend and servant.

Doug has been a member of the New Canaan Society since 2006 and is the co-founder and co-leader of NCS Urban Chapter in Paterson, New Jersey.  One of his’s favorite hobbies is visiting NCS chapters throughout the network (so far he has visited least 15 chapters, tied with Jay Helvey and one ahead of Tom Cole and looking forward to catching up with James Anderson).  Doug considers himself an NCS Ambassador who wants to take the message of the love of Jesus Christ through the ministry of NCS wherever he goes.  He is in the process of starting a chapter in Jamaica where he was born.  Doug believes God brought him to NCS in order to help him embrace his brokenness and to equip him to minister to broken men like himself.

Doug’s mission is to help men WIN at life so that they can experience God’s abundant life (John 10:10).  He views NCS as a ministry tool God has given him to use in his outreach.

Doug is a husband of one wife and father of four young adult children, father-in-law of one and grandparent to be.