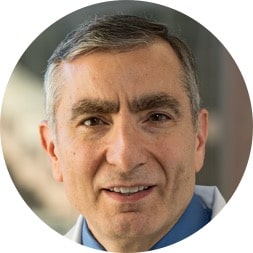 Dr. James Tour is a chemist, nanotechnologist, Biblical scholar and Messianic Jew.  He serves as a Professor of Chemistry, Professor of Computer Science, and Professor of Materials Science and NanoEngineering at Rice University.

Although Professor Tour’s research areas include organic chemistry, materials science, polymer chemistry, nanomedicine, green carbon research, graphene, nanotechnology, and K-12 educational outreach, he says he has studied the Scriptures “more than any other topic in my life, including chemistry”.   Born and raised a Jew in the New York City area, while a college student in 1977, Tour “came to the realization that Jesus Christ is indeed the Jewish Messiah.” In his words: “I asked Jesus Christ to forgive me for my sins and to come into my heart. The result was an immediate and sustaining sense of his presence, peace and joy in a manner that I had never before known.”  His faith story and beliefs can be found at jmtour.com/personal-topics/personal-statement/

Tour has over 700 research publications and over 140 patent families.  Professor Tour’s recognition and awards are too numerous to list, but here is just a sample of recent accomplishments:

Dr. Tour has been married to his wife for nearly 40 years and they have four children, all of whom share his belief in Jesus.