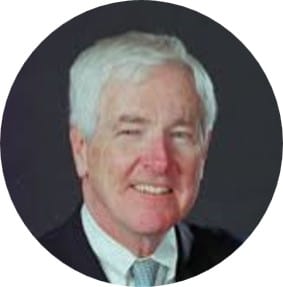 Edward Mahoney is the author of Tales from the Bright Side: The Holy Spirit Adventures of Edward Peter Mahoney, a memoir of Ed’s awesome encounters with the Holy Spirit since 1999.  He has been a member of the New Canaan Society for many years and faithful member of the NCS New Canaan Energy Group known as “L5” since its inception in 2011.  He also serves as President of the Launch 5 Foundation.  Tales from the Bright Side had its birth when Ed shared his journey one Friday morning in 2018 at a meeting of NCS Winston-Salem.

Born in Brooklyn, New York, in 1946, Ed was raised on Long Island in Mineola, New York.  At the age of five, Ed was admitted to St. Francis Hospital and Sanatorium in Roslyn, New York, with rheumatic fever. His illness was so severe, he was given “Last Rites” twice and spent two years in convalescence before becoming well enough to return home.  Those traumatic events shaped his life, bestowing upon him a heightened appreciation for the gift of life and a sensitivity toward God and the needs of others.

Ed began a long Wall Street career in the early 1970’s when he joined Merrill Lynch, Pierce, Fenner & Smith as a trainee. He quickly moved up the ladder to become its U.S. international fixed income sales manager responsible for the firm’s account list comprising the world’s largest central banks and sovereign wealth funds.  In 1982, Ed transferred his skills to Fuji Securities Inc., currently Mizuho Financial Corporation. As senior vice-president, he reported directly to the office of the president and CEO and represented the firm on the executive committee. His team serviced world central banks, top U.S. and global institutions for fixed income products, treasuries, emerging markets, foreign exchanges, and credit derivatives generating more than $1.25 billion in sales revenue. He also worked closely with the Federal Reserve Bank and the US Treasury Department. He was a regular attendee of International Monetary Fund annual meetings and was a guest speaker at international conferences held by institutional investors.  Ed co-founded Young America Capital LLC, a broker-dealer member of FINRA, and a placement and advisory service for money managers and private equity funds. In 1997, he established E.P.M & Associates LLC to raise funds for money managers, generally acting as an exclusive marketing agent in North America representing domestic managers with more than $1 billion in assets under management.

His current and past civic leadership positions include Westchester County, New York, Board of Directors Deferred Compensation Pension Fund (2010-May 2017); Director of municipal relations for the Construction Industry Council of Westchester County and Hudson Valley. He reported directly to the office of the president, and advocated for labor union members and private contractors for business and public works projects, including the construction of the $3.4 billion Tappan Zee Bridge and other municipal government public projects (2010-2015). Chair, Lewisboro Housing Committee (2009-2012); Administrative transition team: Chair of Public Works and Westchester County Airport subcommittees for newly elected Westchester County Executive, Robert P. Astorino (Nov. 2009 to Feb. 2010); Supervisor, Town of Lewisboro, Westchester County (elected 2006-2008).

He attended Adelphi University in Garden City, New York, where he earned a B.A. in Political Science and Economics in 1970. He also took several courses toward a post-graduate degree in business administration.

Ed and his wife Anne have been married for nearly 50 years and are currently living in Delaware (slowly moving back north after trying out South Carolina and North Carolina).  They have four daughters and three grandchildren.