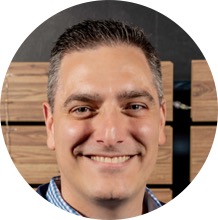 Jason Romano is an author, speaker, and media professional with over 20 years of broadcasting experience.  His first book is titled “Live to Forgive”, and he’s begun work on his second book that will release in 2020.

For 17 years, Jason was an Emmy-Award winning Producer and Senior Manager at ESPN. He has created and produced content for shows such as SportsCenter, Monday Night Football, Mike and Mike in the Morning, Sunday NFL Countdown, College Gameday, MLB’s All Star Game and many more.

During his time at ESPN, Jason helped lead and grow the talent booking department, building relationships with the biggest names in sports as well as creating and managing the NFL on ESPN’s social media channels, growing them to over 6 million followers on Twitter, Facebook and Instagram.

In February of 2017, Jason took a leap of faith and walked away from his job at ESPN to pursue sports ministry.

One month later,  Jason launched the Sports Spectrum podcast, an interview driven show that features athletes, coaches, entertainers and other personalities sharing their stories on the intersection of sports and faith. Jason serves as the host, producer and editor for the podcast that has had over 1 million downloads since its debut on March 31, 2017.  He also contributes articles and stories to Sports Spectrum magazine as well as SportsSpectrum.com.

Jason has spoken to audiences large and small at conferences, colleges, companies, high schools and churches. He’s a big advocate of social media, having built up large followings both for ESPN’s social feeds as well as his own personal brand.