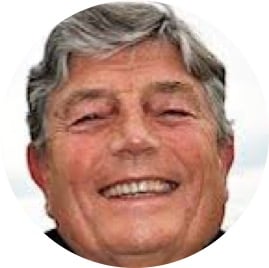 John Guest was born and raised in Oxford, England. While studying as an engineer he was invited to hear the American evangelist, Billy Graham, in London, 1954. That night John responded to God’s call and made his commitment to Jesus Christ at age eighteen. Shortly thereafter, he felt God calling him into full-time service as a pastor.

John graduated from Trinity College in Bristol and was ordained by the Church of England in 1961. He came to the United States in 1964; combining his love for young people with his musical ability he formed one of the first Christian contemporary music groups known as the Exkursions. For the next four years John used music to draw young people to meetings where thousands of them heard for the first time the “Good News” of Jesus Christ.

Ultimately, John became convinced that he needed to work in and through a local church if those who were won to Christ were to grow in maturity. In 1968, he became the Minister of Youth at St. Stephen’s Church in Sewickley, Pennsylvania (a suburb of Pittsburgh) and four years later the senior pastor. St. Stephen’s has been one of the fastest growing Episcopal churches in America with over 1,000 attending weekly.

Recognizing the gifts God has given him for evangelism, in 1990 St. Stephen’s set him free to conduct city-wide evangelistic crusades across America. John has spoken to over 1,000,000 people face to face since his first major crusade in 1985. Perhaps the mark of John’s ministry is his uncompromising, thoroughly evangelical, preaching style. He has been called “the thinking person’s evangelist,” a term that rightly describes his gift for combining brilliant apologetics with a powerful speaking style that has earned him the respect of historical critics of crusade evangelism.

In 1995 John’s commitment to the church culminated in his return to the pastorate by his acceptance of a call from Christ Church at Grove Farm in Sewickley, Pennsylvania. His passion for evangelism remains now accelerated by Christ Church’s gift of John’s time and lay volunteer energy to his national ministry. His national and international outreaches are scheduled throughout the next two years.

John is the author of ten books. He co-founded Trinity Episcopal School of Ministry and was a participant in the Lausanne Committee for World Evangelism and a board member of the National Association of Evangelicals. He founded the Coalition for Christian Outreach, an evangelistic organization employing approximately 150 staff on college campuses. Also, he co-founded South American Missionary Society (1976), hosted a daily radio broadcast, “New Life In Christ,” on WPIT-FM, Pittsburgh (1983-1990), and currently has a daily broadcast on WORD FM, 101.5 in Pittsburgh as well as several other cities. He is also a featured speaker at Promise Keepers Conferences within the U.S. John married Kathleen Heggar in 1967 and has four daughters: Carrie, Chelsea, Sarah and Susanna.