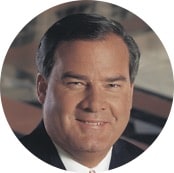 John G. Rowland served as Connecticut’s Governor for almost 10 years before resigning from office during a federal investigation and then serving 10 months in a federal prison camp.  Because of his journey, he brings the insight and candor of a political leader who has seen great success and has learned exceptional lessons from the challenges faced at the end of his public service career.

Elected to the Connecticut State House of Representatives in 1980 at the age of 23, John Rowland rose rapidly to serve three terms in Congress before being elected the youngest Governor in Connecticut history in 1994 and then re-elected two more times. He was called by the Wall Street Journal “one of our nation’s rising stars”. His public service career resulted in a renaissance throughout the cities of Connecticut.  His vision brought the University of Connecticut and all the public universities to the first rate educational facilities they are today. During his years in office Connecticut experienced record budget surpluses, tax reductions, job growth and economic expansion. His focus on the inner cities and cultural investments in the arts helped rejuvenate our communities.

He is now the Development Director for Prison Fellowship Ministry, covering the northeast United States. He is extensively involved in community, ministry services, and still lives in Connecticut with his wife Patty.