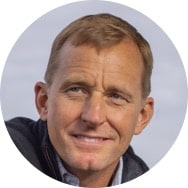 Chip Skowron is a follower of Jesus Christ by the will of God.  He and his best friend Biggs Burke are the co-founders of NCS-Inside, the New Canaan Society’s outreach to prisoners.  While Chip’s passion is fellowship with his brothers and sisters in prison, he and Biggs have also created a number of business partnerships that range from healthcare to fashion and entertainment.

Chip was born and raised in Cocoa, FL.  He graduated from Vanderbilt University and went on to complete his Medical Degree and Ph.D. in Cell Biology at Yale. After 3 years of orthopedic residency at Harvard, he chose to leave clinical medicine and pursue a new career on Wall Street.  His background in medicine and experience working at several renowned hedge funds opened the door for him to build the FrontPoint Healthcare investment team which launched their first fund in 2003.  By 2005, Chip and his partners were managing in excess of one billion dollars and on their way to establishing a world leading asset management business.  He and his partners sold FrontPoint to Morgan Stanley and during the financial crisis, became notable for being one of the few firms that successfully navigated the storm.  At the end of 2010, it was revealed that Chip was the focus of a criminal insider trading investigation and his investment career at FrontPoint abruptly ended.  In 2011, Chip was sentenced to serve 5 years in Federal Prison for conspiracy to commit securities fraud and obstruction of justice. Prison was the best education Chip ever received, and Jesus moved into the center of Chip’s life. It was there that God saw fit to bring him together with Biggs Burke – who quickly became his best friend. Through his time inside, the Lord broke Chip’s heart and he had a vision for NCS chapters inside. He was released from prison in May 2015.  The process of coming home has been the biggest challenge of his life.

Chip lives in Greenwich, CT with his wife and four children.