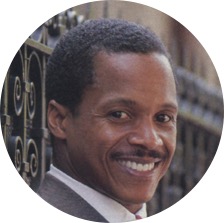 Joseph H. Holland is an attorney, entrepreneur, government official, writer and ordained minister with over thirty-five years of experience of serving the community.

Holland operated a Harlem-based real estate law practice and used his management skills to build commercial enterprises and expand employment opportunities in Harlem. He was instrumental in establishing an American Express Travel Office, a Ben & Jerry’s ice cream parlor, a Body Shop retail store, and Harkhomes, a homeless shelter whose residents found work in these businesses. He also served for many years as Vice- President of the Harlem Business Alliance (hbany.org) and co-founded the Beth Hark Christian Counseling Center, which recently celebrated thirty years of community outreach (bethharkccc.org).

Holland’s writings include: an inspirational self-help book – “The Touchstone Tools: Building Your Way To An Inspired Life” (touchtonetools.com); his spiritual memoir – “From Harlem With Love: An Ivy Leaguer’s Inner-City Odyssey”; his first stage play – “Cast Me Down”, which enjoyed a Off-Broadway run; and his second stage play, “Homegrown,” which experienced two extended runs at Harlem’s landmark National Black Theatre. His new book – “The Vigorous Virtues: Daily Success Principles From Diverse American Founders” will be released in Fall 2019.

Holland has received awards and honors for both his business and social service accomplishments. In 1993 President Bill Clinton recognized Mr. Holland in a White House ceremony for his community-building initiatives. He received an honorary degree from the City University of New York Law School and was recognized for his career accomplishments by the Ivy Football Association in January 2017 and by the City of Yonkers, New York, which proclaimed “Joseph Holland Day” on June 7, 2017.

A graduate of Cornell University, where he earned a B.A. and M.A. and was an All-American and Academic All-American football player, Holland has served as a member of the University’s Board of Trustees since 1988. He holds his J.D. degree from Harvard Law School.