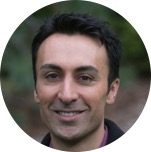 Kevon Saber is an entrepreneur and a mobile technology innovator.  His experience spans the spectrum from startup success to helping Fortune 100 companies create new technology businesses.

Today, Kevon is the CEO of GoCheck Kids, a leading company in the fight against vision impairment in children.  Thousands of pediatricians use GoCheck Kids’ technology in the U.S. and Europe to detect vision disorders in young children.  Vision impairment is the most prevalent disability among children, and a leading cause of learning disabilities.  GoCheck is funded by Interwest Ventures, a top healthcare investor (85 IPOs), Marc Benioff, founder and CEO of Salesforce.com, and John Voris, the CEO who took ePocrates public.

He was named to Silicon Valley Business Journal’s 40 under 40 list, and his work has been featured in Mashable, LifeHacker, Entrepreneur Magazine, Inc. Magazine, Family Circle, and on various ABC, CBS, and FOX TV shows.  Kevon is also a contributing writer for Forbes, Fast Company, and Venture Beat.  Before his recent move to Nashville, he lived in the Bay Area and received his MBA from Stanford University.