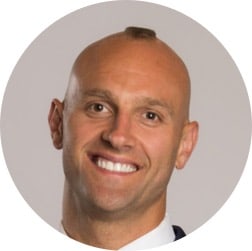 Mark Herzlich is a Super Bowl Champion and was an all-American linebacker/tight end at Boston College.  Following a seven-year NFL career with the New York Giants, Herzlich serves as an analyst for ESPN’s ACC Network football game coverage, as well as anchoring in studio.

During his time with the Giants, Herzlich was named as a finalist for the Walter Payton NFL Man of the Year Award, and won the United Way Gridiron Community Champion Award and the Ed Block Courage Award. While at Boston College, Herzlich earned all-America honors along with being named the 2008 ACC Defensive Player of the Year. The following year, Herzlich was diagnosed with Ewing’s sarcoma, a rare form of bone cancer. In September 2009, after undergoing aggressive chemotherapy, radiation and surgery, Herzlich announced live on ESPN’s College Gameday that he was cancer free.

He rejoined his Giants teammates for the 2010 season, starting all 13 games and collecting the Rudy Award, the ACC’s Brian Piccolo Award, as well as an ESPY for Comeback athlete of the year. Mark lives in Rowayton, CT with his wife and son and published a memoir titled What It Takes: Fighting for My Life and My Love of the Game.