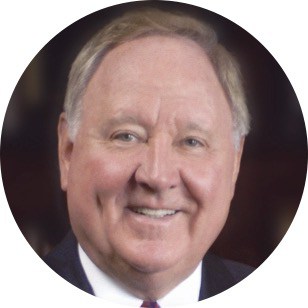 Mike Timmis was born in Detroit, Michigan, where he has had a distinguished career as both an attorney and businessman.  Mr. Timmis’ autobiography was published in February 2008 by NavPress entitled Between Two Worlds: The Journey of an Evangelical Catholic.

Mr. Timmis was senior partner of the law firm of Timmis & Inman L.L.P.  He was also the co-founder and vice-chairman of Talon LLC., a privately-owned company formed in 1973 with extensive interests in manufacturing both in the United States and Europe, retail, as well as numerous real estate companies.

Mr. Timmis serves or has served in a leadership capacity on the Boards of many charitable organizations and foundations including St. John Healthcare Systems, Cornerstone Schools, Inc., etc.  Mr. Timmis has served on many ministry boards including The Navigators, Promise Keepers and Prison Fellowship Ministries (USA).  Also, Mr. Timmis served as Chairman of Prison Fellowship International for 16 years, which comprised 129 countries.  Currently, Mr. Timmis is on both the Board of Alpha International and Alpha in Prisons both of which are based in London, England.  In addition, Mr. Timmis is one of the founders of NCS Grosse Pointe and serves on the NCS National Board.

Mr. Timmis has been married to the former Nancy Lauppe for fifty-seven years.  The Timmises have two children, a son Michael and a daughter Laura, who died thirty-four years ago, and five grandchildren.