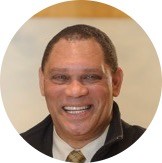 Nick Medley is a Guest Service Representative Lead at Memorial Sloan Kettering Cancer Center in New York, where he has worked for the past 16 years. Nick has been making a difference in so many people’s lives; helping cancer patients and their families who are facing difficult, painful and frightening situations. His daily guidance, and encouraging spiritual support makes their lives a bit easier and his compassionate care has aided many on their path to healing.

He has been acknowledged by more than 1,000 patients about his great compassion and care. Nick was featured on ABC World News with Diane Sawyer and interviewed by news anchor and host, David Muir. In April of 2014, Nick was named “America’s Strongest.” His boundless affirmations and award honors include: the “Healthcare Chaplaincy Wholeness of Life Award for Outstanding Patient Care” in 2005; the “MSKCC Employee Legendary Services Award” for going above and beyond in 2003; the “Community Service Award” from the New York City Police Department for outstanding service to the community which was awarded by NYPD commanding officer and the community council in 2012; and the “Human Spirit Award” for appreciation, outstanding services and extraordinary commitment to the betterment of humanity from the Healtheo360 webcast program by CEO, Dave Duplay in 2015. Nick is currently featured in a photo exhibit titled “Son’s” at the African American Museum located in Hempstead, New York. He is amongst more than one hundred photos of African American men who are featured as role models in today’s society.

For the past seven years, he has been a volunteer involved in mentoring and speaking at various inner-city middle schools to encourage students to get involved with the arts and also finish school. Nick himself is a 1985 graduate of the New York Academy of Theatre and Music.