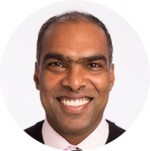 Prior to founding Matchbook Learning, Sajan was a Managing Director with Alvarez & Marsal (“A&M”) where he led the firm’s Education Practice. In that role, he co-led a diverse group of talented turnaround professionals across the U.S. in turning around entire K-12 public school districts in St Louis, New Orleans, New York City, Washington DC, Detroit, etc.  Sajan’s entire career has been involved in turnarounds – first with large corporations, then large urban school districts and now finally individual schools.  Sajan has a deep sense of calling around the need to turnaround public education in America.  Leaving the for-profit corporate turnaround world in 2011 to launch a non-profit school turnaround organization was both a massive leap of faith and yet an inevitable progression in his calling.

Sajan, in 2015, moved his wife, 3 children — Michav (12), Seth (10) and Isa (7) — along with the family dog, Titan, from Atlanta to NYC to continue the adventure and dream.  They are active members in their local church and enjoy traveling extensively, reading voraciously and experiencing new people, cultures and foods.