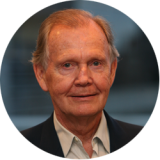 Terry Laughren is a retired marketing executive, a private equity investor, a board director and advisor in media and marketing services, and, as a Florida resident, co-founder of NCS Coconut Grove.  Most importantly, he is a mentor to many men in their life and faith journeys.

Terry started his career as a brand manager with Proctor & Gamble Company.  He went on to hold senior level positions at International Playtex, Mattel, J. Walter Thomson and E. & J. Gallo.  In 1981, Terry founded Screenvision Cinema Network and created the concept of showing commercials before films in movie theaters, eventually placing ads on more than 6,000 movie screens nationwide.  He held the positions of President and Managing Partner and then Chairman of Screenvision until 1990.  Terry now serves as a Managing Director of Ashcreek Capital Advisors and is the owner of The Laughren Group LLC.

When he was residing in Connecticut, Terry was an active member of Trinity Church in Greenwich, CT and one of the original leaders of Trinity’s men’s groups.   Since moving to Coconut Grove, Terry has been a member of Plymouth Congregational Church.

Terry was born in Trenton, NJ but grew up in Maine.  He earned his BA with honors from Boston University in 1961 and served in the United States Army from 1961-1963, earning the rank of First Lieutenant.  Terry has served as Chairman of the Boston University National Alumni Council.

Terry and his wife Leslie reside in Coconut Grove, FL and also maintain a home in Darien, CT.  He has three adult children from a previous marriage and one grandson.